Home > About IFOMPT > Our Story 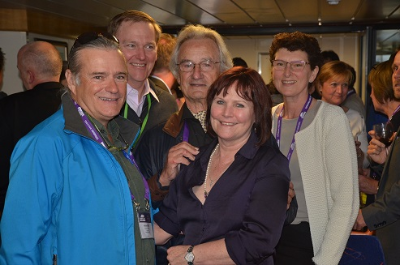 With great foresight, the inaugural meeting of IFOMT established a Membership Committee - later changed to Standards Committee - to set up a curriculum of study and examinations. In 1975 the first IFOMT Congress and General Meeting was held in Gran Canaria, Spain. An initial draft of the Standards Document (theoretical component) was developed and signed by the Standards Committee of Freddy Kaltenborn (Chair, Norway), Gregory Grieve (UK), David Lamb (Canada) and Brian Edwards (Australia). At the IFOMT General Meeting in 1977 hosted in Vail, USA, the Standards Document (with theoretical and practical components) was presented, to be subsequently ratified at the World Confederation of Physical Therapy (WCPT) meeting hosted in Tel Aviv, Israel in 1978.

Very importantly for IFOMT with its international physical therapy focus and mission, it was also granted status as a subgroup of the WCPT at the meeting in 1978. IFOMT was the first subgroup of WCPT- now called World Physiotherapy.

An IFOMT strategic meeting in 2001 hosted in Antwerp, Belgium was important for the development and direction of IFOMT 2001-2008; in line with its vision for ‘worldwide promotion of excellence and unity in clinical and academic standards for manual/musculoskeletal physiotherapists’. The mission and vision of IFOMT are represented in the Constitution, in which regular conferences no less than every four years are stipulated, and the criteria for membership are laid down. The items identified as important areas for development in the strategic plan of 2001 were: funding, website development, education, communication and a resource centre. As most of the strategic goals were met in 2010, a Strategic Planning Meeting was held in Cincinnati (USA) in 2013. At this meeting the main strategic goals were branding of IFOMPT, leadership, educational standards, communication, research, finance, and the growth of Registered Interest Groups and Member Organisations. 2020 saw a further round of strategic planning which lead to the planned direction for the next period of its existence:

The first IFOMT website went live in 2004 and was updated in 2010, 2014, followed by a revamp and relaunch of the site in 2020. The Executive Committee reviews the strategic goals annually and in 2016 established advisory workgroups and task forces to correspond with the strategic plan priorities.

The name of IFOMPT has been considered multiple times over its history, with a number of initiatives to change elements of the name. In 2001, members voted against changing to the term musculoskeletal (9 for, 6 against and 2 undecided).  In 2008, the name was changed to include the word "Physical Therapists" instead of Therapists.  In 2021, it was again proposed to change to the term musculoskeletal and this motion that required a super majority to pass, was narrowly defeated: 15 for, 8 against and 1 abstained. A brief timeline of the name change process can be seen here.

The IFOMPT logo was revised and accepted in Rotterdam at the 2008 General Meeting. In 2009, IFOMT changed its name and logo to incorporate the term Physical Therapist to become the International Federation of Orthopaedic Manipulative Physical Therapists (IFOMPT). In 2015, as part of the branding of IFOMPT, the logo was again revised and accepted at the General Meeting in Glasgow 2016 along with the tagline, “The Global Leader in OMPT Excellence”.

The IFOMPT Constitution has been updated and revised several times over the years to ensure that it remains relevant and responsive the the needs of a dynamic organisation.  The latest revision took place in 2020 and as a result, the entire Constiution was replaced by substitution as approved at the 2020 General Meeting.

At the General Meeting hosted in Perth, 2000, the Member Organisations of IFOMT voted for a process of International Monitoring to ensure on-going quality of educational programmes and continued achievement of the IFOMT standards by Member Organisations. The document was developed by Agneta Lando (UK) and Alison Rushton (UK), and provided an addition to the Standards Document, namely ‘Part B, International Monitoring Document’. The document was accepted at the General Meeting in Cape Town, 2004.

IFOMT started out with 6 ‘voting’ member countries (Australia, The Netherlands, Norway, New Zealand, Sweden and The United Kingdom) and five ‘associate’ member countries. Currently IFOMPT consists of 24 Member Organisations and 17 Registered Interest Groups, while a third membership category, namely Associate Member Organisation, was also added as part of the Constitutional review that was approved at the 2020 General Meeting. IFOMPT is an active and growing federation of countries passionate about further development of Orthopaedic Manipulative Physical Therapy throughout the world.